If you've heard of Gamze, it may be through Ashens' video on one of their consoles, featuring three of the common Pop Station-type LCD games in an inventive rotating design. But a whole host more consoles were released under the Gamze brand, including multi- and single- game handhelds and virtual pets, sold chiefly in the UK but also in other parts of Europe and occasionally worldwide. Some Gamze products were essentially re-shelled generic LCD consoles like the one Ashens reviewed, but others offered more original concepts like "Digit Dancerz", "Fitboyz" and "Manga All Stars" - a football-training game offering the opportunity to star in your own manga soccer comic live on the internet(!!??!) (its website is sadly long-gone and doesn't seem to be archived). And there are also some with the Annoying Thing (aka Crazy Frog) license, because it was the mid-2000s and of COURSE there are.

Gamze products were distributed by Nikko UK at some point, seen here listed on Nikko's website in 2006 - but far from being a sub-brand of Nikko as I'd initially assumed, Gamze was actually an independent company with both UK and Hong Kong branches. The UK side was "Gamze International" run by Les Forgham (interviewed here about Manga All Stars), with the Hong Kong company "Gamze Ltd" presumably handling manufacturing and games development with the help of various Chinese subcontractors. Sadly Gamze's former website at "gamzes.com" isn't archived. Les Forgham himself was once a managing director at Tiger Electronics UK, so you can probably see where his taste for LCD games came from; at one point Gamze even put out their own version of Tiger's classic Lights Out game. 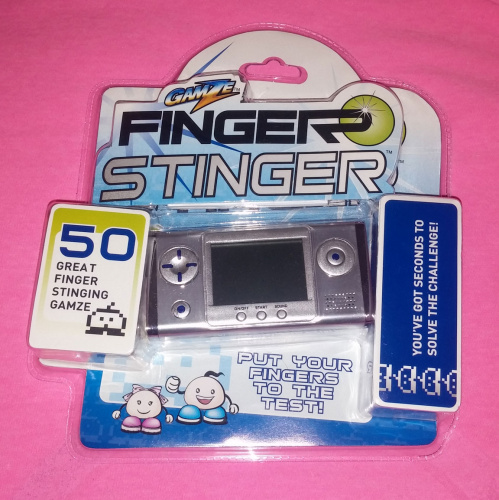 And so, finally, this brings us to Gamze's Finger Stinger, the stinger of fingers. With 50 great finger stinging gamze! This seems to be an exceedingly rare product compared to others in Gamze's lineup, with searches for "gamze" and "finger stinger" together turning up only a handful of trademark registrations, a single Amazon listing (with none available for sale) and Gamze International's own YouTube channel - more on that later. I'm not sure why the Finger Stinger is such an obscure product - Gamze (or distributor Infoport) may have struggled to find retailers willing to carry it, or it may have been a victim of Gamze's own downfall in the late 00s, apparently due to the European financial crisis (according to this Hong Kong court case). It may be that the only units ever sold were shifted through that one Amazon listing, or in a few obscure discount stores. 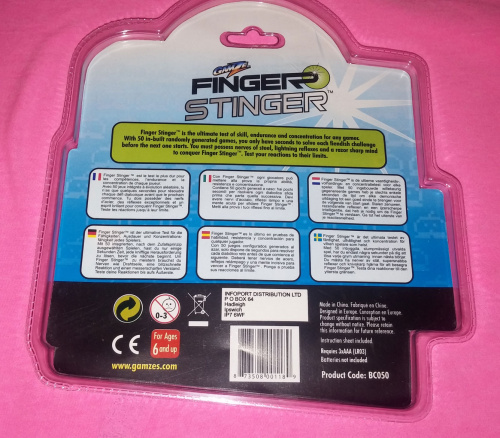 So, just what is it? The name makes it sound almost like those joke fake game consoles that deliver a small electric shock when you press the buttons, but, well, it's not that. The box here advertises it as "the ultimate test of skill, endurance and concentration for any gamer", with "50 in-built randomly generated games" - so it's a reaction tester of sorts? But what are these 50 games? Randomly generated, as in procedurally-generated? Or what?

Here's the console out of its packaging - it's quite a nice compact little unit, with the front part of the main body seeming to be actual brushed aluminium. Premium! 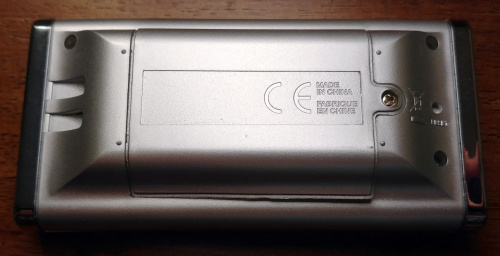 The back is just metallic painted plastic, and it takes 3 AAA batteries but the back cover doesn't seem to fit properly with them installed. Less premium!

Anyway, let's turn it on: 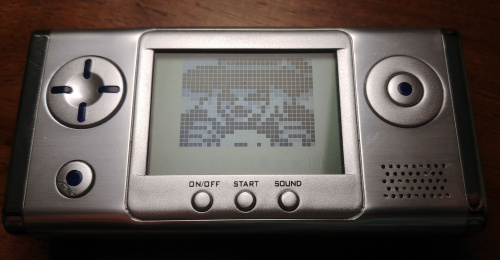 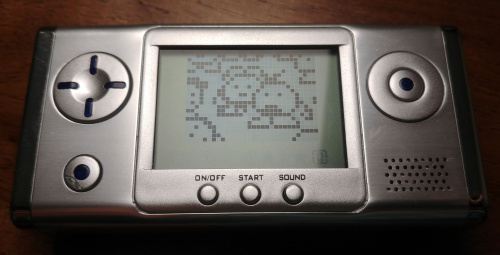 Well that's a surprise - a fully one-minute long animated fantasy intro sequence, rendered in single-colour low-res LCD glory, coupled with bleepy single-channel music plus the occasional sampled sound effect. This is really sub-Game King hardware, something along the lines of what you'd find in a Tamagotchi (I suspect it might be derived from what Gamze's own virtual pets used), but I mean ... it's something! It's not a Pop Station! It has graphics, and music, and programming, and they even gave it a story! So it goes, apparently a witch with the ability to transform into a hawk has stolen some kind of precious artifact from a town of blob-people, and when a couple of blobs set forth to recover it, she proceeds to kidnap one of them too. Nightmare! Fortunately, the remaining blob-person is filled with DETERMINATION and sets off on a journey to the witch's castle. And honestly, given the extreme hardware restrictions, this is all really cute and well-animated? The Finger Stinger is looking pretty good so far! 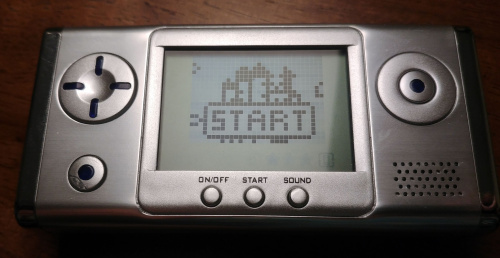 Start! Of course, this has all given no clue as to what the actual game will be like. There are two modes, so let's just dive into the first, "Story Mode", as the manual has it: 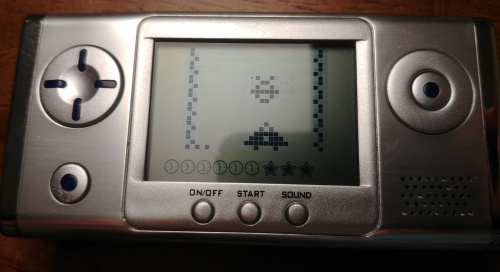 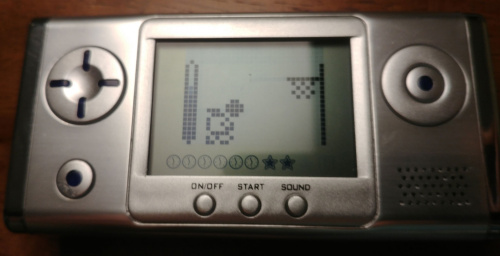 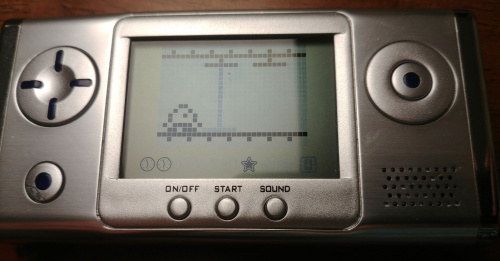 yes! What the Finger Stinger ACTUALLY is is a standalone-handheld take on the Wario Ware concept, with minigames of a few seconds each, where a big part of the challenge is often figuring out what you're supposed to do before it's too late. This is rendered harder than in Wario due to the lack of any on-screen instructions, coupled with the low-res visuals sometimes making things less than clear (although, again, the artists have done a pretty damn good job with the limitations they were working within) but by the time the games have repeated a few times you'll probably be on top of most of them 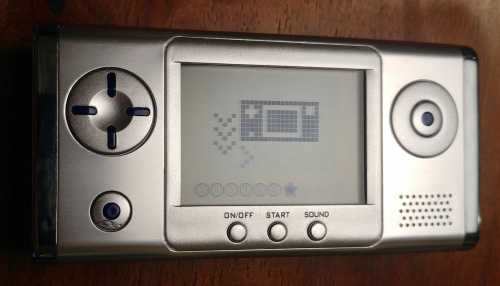 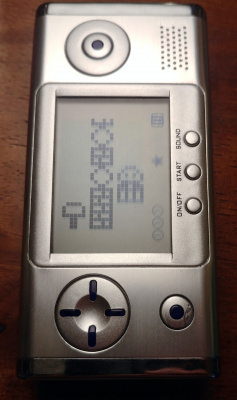 Yes, some of the games are played in portrait mode, and require you to rotate the console 90 degrees, Wonderswan-style, using the rotated D-pad in conjunction with the button next to it. And when I say require, I mean REQUIRE - the console actually has a sensor inside serving the sole purpose of making sure you rotate it in the correct orientation for the next minigame, and it will beep at you until you do it. Unfortunately, the cheap LCD was not particularly designed for multi-angle viewing, so the screen is usually rendered harder to see when you do this.

In total, there are indeed 50 of these minigames/minigamze, offering various timing-based challenges - some of them seem to be directly inspired by those in Wario Ware, while others are original. Every 10 points you get a bonus stage allowing you to earn back one of your 3 lives, and after 3 bonus stages you apparently get the chance to challenge the Ultimate Final Bonus Game (this is what the manual actually calls it). I say "apparently", because the "up" direction on my unit's D-pad is barely functional and requires a huge amount of force to register - literally finger-stinging! - which renders any game requiring that direction almost impossible to beat. Therefore, sadly, I've been thus far unable to reach the Ultimate Final Bonus Game and clear the Finger Stinger's challenge.

Now, there is one more mode here, and its menu looks like this: 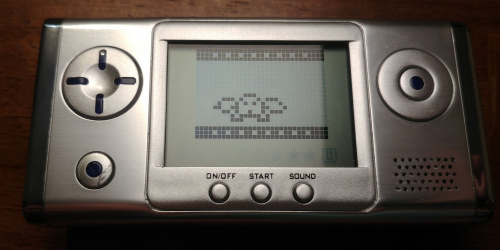 The manual calls this "collection" mode, similar again to Wario Ware in that you unlock games here after playing them in Story mode. But with the slightly strange limitation that this mode actually just contains demos of each game being played, and doesn't allow you to actually play them? Seems like a missed opportunity, given that playable versions would have allowed you to both practice the games for the main mode and try for a high score on each. But that's the Wario way, not the Finger Stinger way, I suppose. wah

The Stinger does save your high scores in Story mode and games unlocked in Collection mode, but unfortunately it only does this using the AAA batteries inserted in the unit; it doesn't have a separate internal battery to keep the SRAM powered up. So whenever you need to replace the batteries, all your hard-earned(?) achievements(?) will be lost.

I have recorded a video of the Finger Stinger's intro and gameplay, which you can view here:

But wait! Didn't I also say I'd come back to Gamze International's YouTube channel? That's because they posted their OWN video of the Finger Stinger's gameplay, not filmed from a real unit but obviously using footage from whatever emulator was used to develop the system, superimposed over a mockup render of the hardware. Here's their video:

As you can see, there are differences! While all the graphics appear to be completely identical to the released version, the music is COMPLETELY different, using some kind of MIDI or FM audio miles ahead of the single-channel beeper found in the actual unit. Now this may have just been a mockup - perhaps the original recording was silent for whatever reason (emulator limitations or the sound just not being finished yet) and they just played some music from another source over the Finger Stinger gameplay footage. But it's also possible the Stinger was intended to have much more sophisticated sound hardware at some point, and it was cut down later to something cheaper and more in-keeping with its visuals. How mysterious!

Anyway, that's my overview of the Finger Stinger; I'm not going to catalogue all 50 minigames just yet (maybe later, if someone REALLY wants to see that) but it's a pretty neat little console! Definitely a cut above what I expected from a cheapo dedicated handheld from a company previously responsible for redesigned Pop Stations. Consider my fingers STUNG

here's an interesting thing I noticed in Gamze's video:
this sound effect at 0:25 here: https://www.youtube.com/watch?v=hy9D2976RVs&feature=youtu.be&t=25
can also be heard at 3:08 (among other places) in this video from the Wow Wireless Gaming plug 'n' play: https://youtu.be/9MjzN95ykE8?t=188
could there be a connection between the developers? or just coincidental reuse of a generic sound effect? hmm!

The music on both the menu and collections screens sounds *really* familiar to me, but I can't place where I've heard it.

It was pointed out in a comment on my video that the menu music is from Mega Man 2 for Game Boy, and yeah the collection screen music sounds familiar to me too, but I can't place it either - I assume all the music is probably taken from various games though

.... so vastly the bootleg game´s world

Continuing the Mega Man 2 Game Boy trend, the MIDI used in Gamze's video (after whatever plays before the 10-second mark) is Hard Man's theme from that same game. Also, do update us if you discover the origins of the collections screen music, please.

P.S. From your gameplay video, it sounds like the audio uses at least two channels, as there are several instances where you can hear two distinct instruments playing at once (notably the menu and game over screen).

P.P.S. I'm interested in the 50 games being cataloged. Maybe if you find one with a working up button (or if you can get it dumped/emulated), you can finish the game?

Honestly, the chances of me finding a fully-working one are pretty low, I haven't seen any for sale since the original listing I bought it from