Last time, I wrapped up my exploration of the E-mods 162-in-1 RS-1, which you could consider the latest iteration of the "normal" RS-1 system. But, of course, the saga of the RS-1 didn't end there. It'd never just be a straight line from the earliest 89-in-1 to this latest 162-in-1. Not in this business. 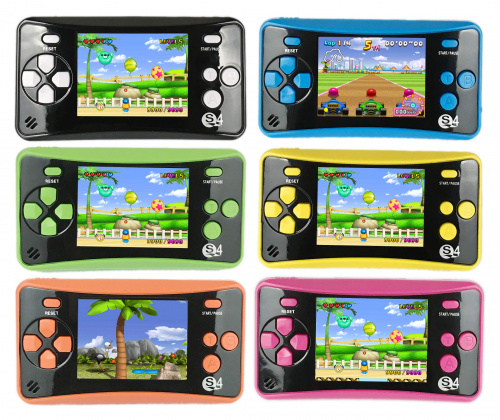 Another tangential update, following the same lines as the E-mods RS-1, is the Qingshe QS-4. This is actually my favourite RS-1 variant aesthetically; rather than having an all-white console with differently-coloured faceplates like the standard RS-1, the QS4 goes for multiple colours of console with a uniform black faceplate. (I say "faceplate" like it's a separate part and not just spray-painted, but you know. Frontispiece?)

(I almost didn't mention this, having become inured to completely fake screenshots on promotional pictures of dubious handhelds, but: the screenshots shown on the pictures above are actually from Senca Technology's Family Sports games, an original set of games developed for Sunplus hardware and found in various cheap consoles with more legitimate aims. But this thing has no legitimate aims, and those Senca games aren't really here. It's still a Famiclone.)

So, Qingshe's approach here was to add another 30 big games, including the likes of Mario 3 and Somari(!!), as well as more obscure niceties like Gun-Nac and Zombie Nation, which honestly probably represents much better value for your casual buyer than the graphically-nicer-but-shallow VT03 stuff tacked onto E-mods' version. 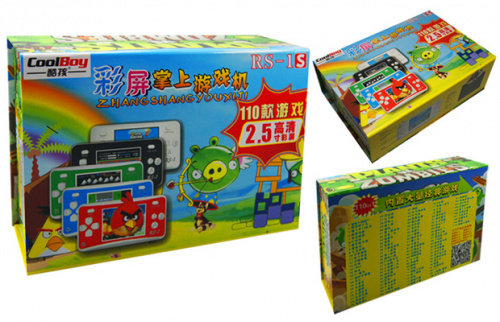 The "true" successor to the RS-1, though, was the RS-1S. And, of course, it couldn't be so simple as there just being one "RS-1S". Of course not. The first RS-1S seems to have been a Chinese-market release by Renshun, actually bearing the CoolBoy brand on its box this time, and can be identified by its all-solid-colour shell (despite the box showing the prior design). I couldn't dig up much coverage of this version, but its internal ROM has been dumped and can be emulated in emulators supporting VT02 OneBus systems, MAME and NintendulatorNRS among others. 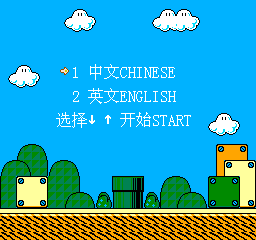 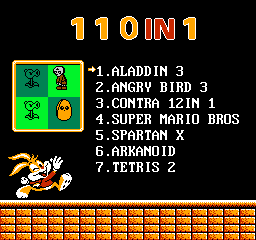 This reveals it to be a 110-in-1 unit with a menu more akin to the "PVP Station"-type machines, Mighty Final Fight music and all. I believe the first 61 games here are mostly based on the lineup from the 89-in-1 original RS-1, but considerably cleaned up and using the "proper" versions where there were weird hacks and misnamings on the 89. The one exception is Aladdin 3, which was moved to the top of the list and then replaced with Plants vs Zombies, while neglecting to change its name in the English menu.

However, the rest of the games from 62 onwards are fresh additions, with no repeats whatsoever! Mostly these are more small multicart staples, but there are a few unexpected sights, like Hello Kitty no Ohanabatake, Burai Fighter and Sachen's Pyramid. Also included are a smattering of hacks like "Deflower", homebrew like Bomb Sweeper, and the rare Korean original Block Puzzle. 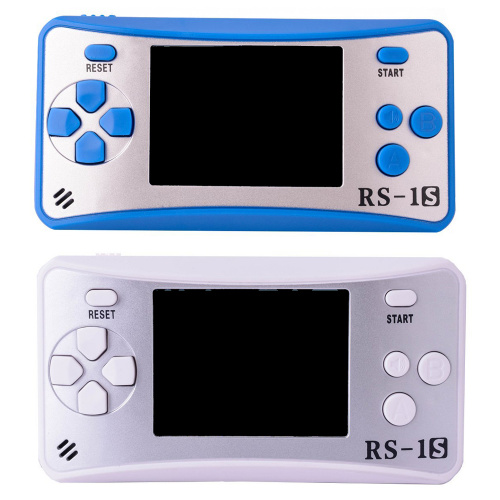 Later on came ANOTHER RS-1S, seemingly an internationally-targeted release along the same lines of the 152-in-1 RS-1. Originally, this one came in either blue with a silver faceplate, or white with a silver, gold or rose gold one.

Later, this was rebadged as "ES-9S", presumably the original manufacturer's designation, following from the "ES-8" number found on the original patent and early prints of the 152-in-1 RS-1 box. But while the RS-to-ES change was reverted for later versions of the RS-1 box, which continues to be sold as "RS-1" today, here the change was only made for later versions, strangely enough. In any case, it serves to create some distance between this updated unit and Renshun's earlier version... which may have been the intent. The ES-9S version also came with the addition of some new colour schemes: all red with white buttons, all red with white buttons, and red with red buttons and a black faceplate. 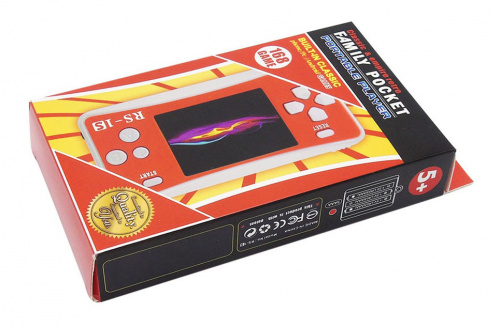 The packaging of this new RS-1S and/or ES-9S bears the "Family Pocket" name, probably placing it as being made after the Family Pocket 638-in-1 console, whose branding spread across various other consoles after its release. It's also described as being "classic & empire retro" - remember that Empire Retro Handheld version from earlier? It seems like the manufacturers took this and slapped it on subsequent consoles as a generic marketing phrase, without actually clocking that it was referring to their client's brand name. Also, much like the CoolBoy RS-1S packaging, this box appears to show a unit in an old RS-1 colour scheme, and not one of the actual 1S ones.

It has a similar style of menu to the previous RS-1S (except featuring a rad dude instead of a buster bunny), but the game selection is completely different, with no particular callback to any earlier RS-1. Again, there are no more repeats, but we have a LOT more larger, later games like Super Mario Bros 2 and 3, Mega Man 3 and 5 and a healthy selection of bootleg fighting game ports.

So, an unambiguous upgrade? Not quite! For some reason, this version lacks both the TV out (!?) and the volume control wheel (?!?!?!?), repurposing that vestigial "T" button as a simple sound on/off switch. It also adds a screw-hole to protect the batteries, with included screwdriver. For the kids! The Chinese-market RS-1S also seems to have had these alterations, judging from the few remaining listings I found, so I'm guessing the "S" was targeted overall at being a cost-reduced RS-1 in terms of parts required, in spite of its improved game selection and presumably-larger internal ROM size. 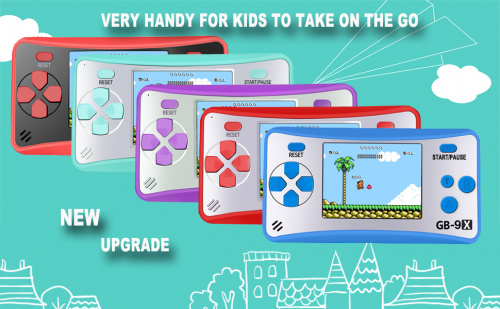 Another variation of this later RS-1S/ES-9S has been released by Zhishan as the GB-9X, which apparently re-adds the TV out, volume wheel AND a headphone jack, which I don't think any other RS-1 has supported. It also comes in a few more - pretty nice - colour schemes. So this is probably the one to get if the RS-1S' game selection appeals to you. (Apparently the "GB" stands for "Great Boy", if you were wondering). 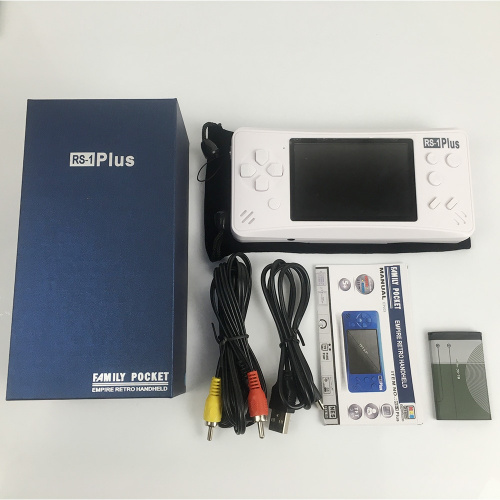 And finally! The most recent development in the RS-1 saga is the most ridiculous, barely-an-RS-1 RS-1 yet: the RS-1 Plus! At first glance, it doesn't look THAT different - but the Plus is actually way bigger, abandoning the compact dimensions of the original to bring its screen up to 3.5 inches from the original's 2.5. So if the RS-1 was the ideal handheld for kids, this is the version for grown ass adults. Just look at that swanky, sophisticated box. Like something you might get a shitty aftershave in. Look at this businessman, enjoying his "private entertainment". Hell, look at the game list. AV Poke? Demon Head? Hung? Dongkey Kong?? This is for ADULTS. This is RED HOT.

It comes with 218 games, no repeats, giving it a heftier game count than any previous RS-1. Like the later RS-1S, it carries the Family Pocket branding, and its menu system seems to come from the same (pocket) family as that of the original Family Pocket console. But I'm not going to go into too much detail on this one, since it really is a completely different unit that just takes a few design cues from the original RS-1 family. Maybe some other time!

In any case, now I've explored just about every RS-1 variant there is (that statement undoubtedly presaging me finding three completely new ones the instant I hit "publish" on this post), I can put together this highly professionalised pocket family tree of the whole lot: 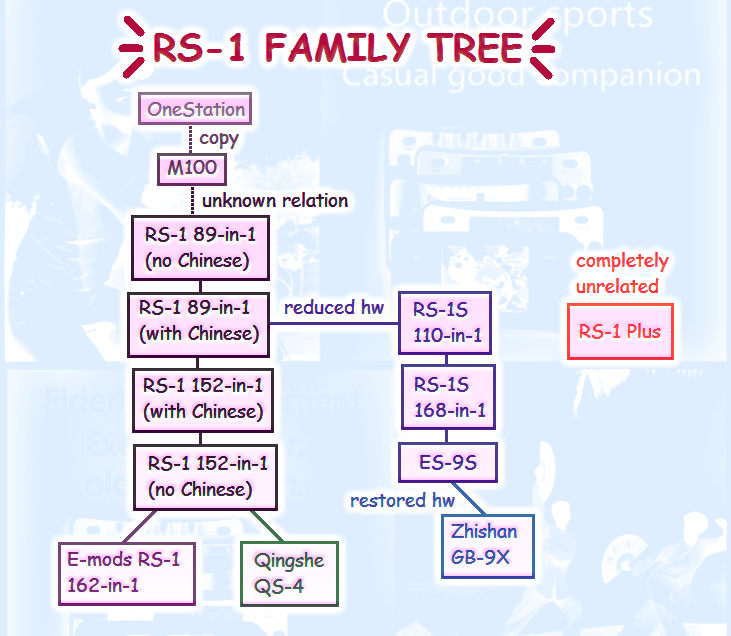 The only thing I haven't really done yet is take an in-depth look at something down the RS-1S branch. Because I'd have to buy one to do that. So I did. Oh no.

Next time: I do that! And then put this whole damn thing to bed

Update 1st September 2019: Revised paragraph on ES-9S version based on new info about the origins of the ES-8 numbering

Hi, I like big screen. So games found in RS-1 Plus is the best out of all variants?