So I've covered the Game King previously as an example of a Chinese handheld with its own proprietary cartridge format - a bona fide almost-Gameboy in the tradition of the mighty Gamate and various others littering the pages of gaming history - but much (much) more common these days are the all-in-one type affairs, those which usually take the sort of hardware previously found in plug and play TV systems and forgo any kind of cartridge slot in favour of bundling a selection of pre-loaded games. One of the more successful in this field has been Jungletac, the company behind: 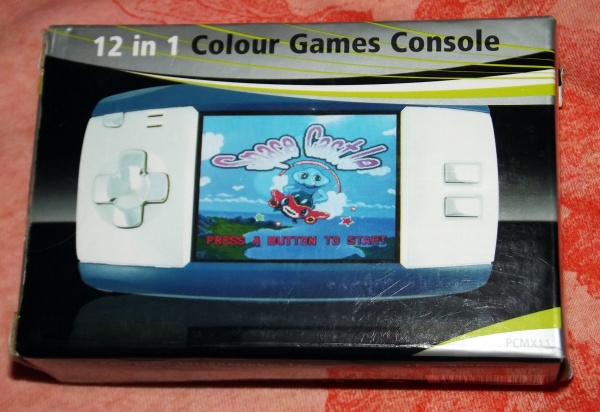 the 12 in 1 Colour Games Console! Yep, a games console in colour. Exciting. If it was 1997. Or if you've just been playing on a Game King, I suppose. This particular version was distributed by Premier Portfolio International, a UK based company seemingly engaged in the supply of overpriced crap for in-flight shopping catalogues and the like (although I got this one on eBay). The side of the box describes it as "fun for all ages" and claims "twelve arcade games in one", by the way, although that's the usage of the word "arcade" meaning "games that have never been anywhere near an arcade but they look like they sort of could have in a weird alternate version of the 90s". 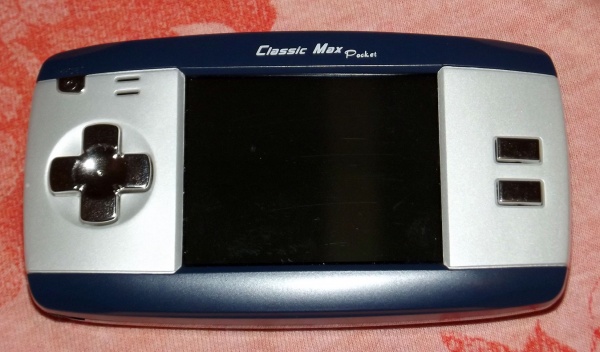 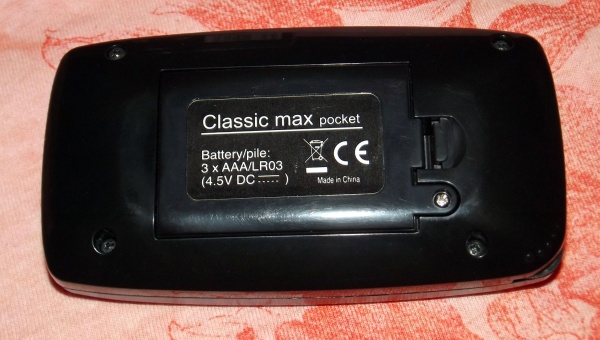 Out of the box, the console now refers to itself as a "Classic Max Pocket", which is Jungletac's usual name for this line. As for the hardware, it's quite an unremarkable little design, sadly lacking in frills like a headphone port or TV out (other Jungletac handhelds do have them but it seems to be the distributor's choice whether to include them or not) but the d-pad is fine (if shiny; apologies for the fingerprints), the buttons are fine, and the screen is nice, as I will attempt to illustrate by taking a picture without the flash: 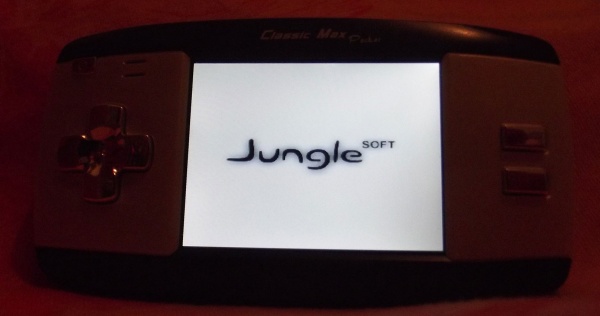 That's Jungle Soft's logo, by the way, Jungletac's name for their internal game development division; all the games here have a 2007 Jungle Soft copyright, although they have been known to outsource (particularly to Nice Code) so the games here may or may not be 100% their work - but I think they probably are. And those games are: 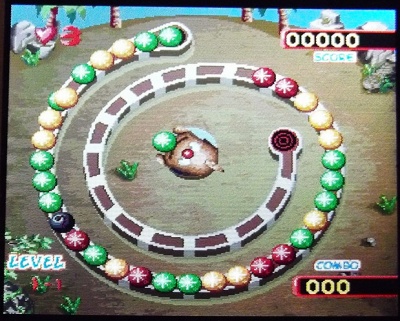 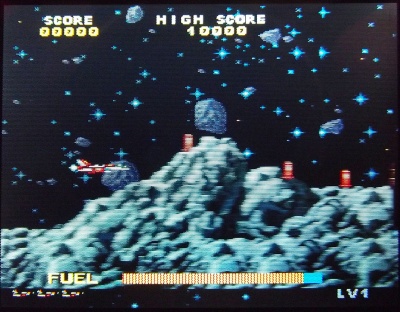 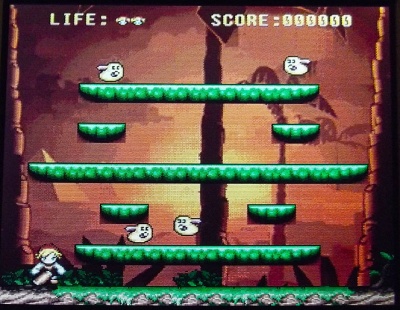 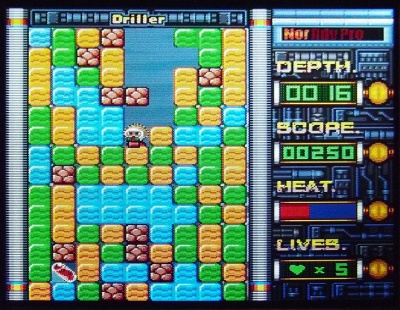 As per usual this also comes with a manual in a few different languages; the English version seems like it was written by at least two different people with wildly different levels of English proficiency, so Bubble Blaster has a nice coherent description in reasonable English and then Night Wings comes along with something like "This is continue to use the core game rule of the plane fire"

Anyway, I said I'd come back to the box, and here's why: 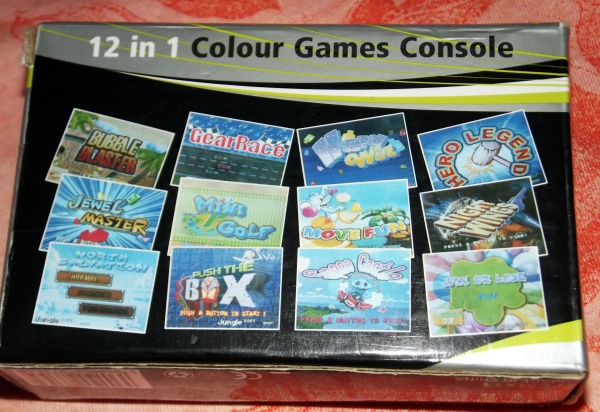 The back of the box has a selection of screenshots of the games' title screens, but some of the screenshots here actually contain considerably more detail than the versions displayed by the console. An easy one to compare is Space Castle since it's right there on the front; here's the box screenshot vs what it actually looks like: 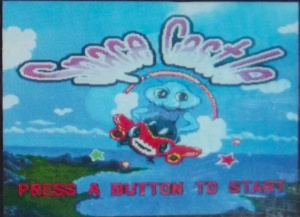 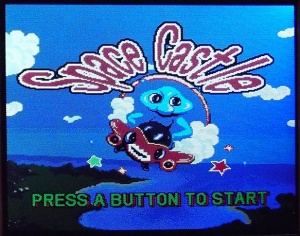 This, coupled with the slowdown in a couple of the games, would seem to suggest they originally ran on more powerful hardware and have been ported down to whatever this thing runs; there are maybe five or more different variations of 16(ish) bit hardware used in Jungletac consoles, so presumably these screenshots show the original versions.

Also, like pretty much every Jungletac console, this thing holds a secret - hold down A and B when you turn the power on and you get this little self-test screen: 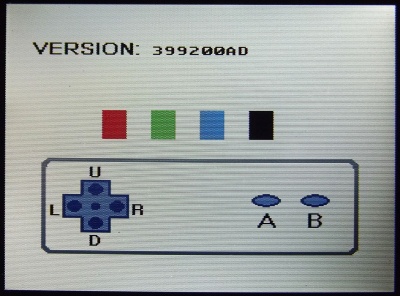 ... So that's it! Not a bad little console really, although its selection of 12 games seems positively minimalist in comparison to later Chinese handhelds that come in closer to (and sometimes even above) the 100 mark. Which I'll have to cover at some point. And it'll take me ages. ;_;

Space Castle has an 8-bit Plug and Play counterpart. Actually, it has TWO.
One has original music and is more polished while the other is crappier and has stock Jungletac NES music.

Wow, this actually looks decent. :o Seeing a Mr. Driller clone on a handheld like this is quite impressive, IMO. I really like reading about this stuff, keep the posts coming!

Yeah the Mr. Driller clone is nice, its just a shame its too slow - I think I have a version on another console that runs at a more acceptable speed though, hopefully I'll get around to covering that soonish

I dunno who the hero of Hero Legend is, but those enemies are clearly Seiken Densetsu rabites with the tail trimmed off (probably from Secret of Mana). That's actually a pretty good trick - makes them look kind of like ghosts. Are there different enemies at higher levels?

I know the audio isn't usually particularly enjoyable, but what kind of sound hardware do these systems usually use? Is it akin to anything that was ever used in consoles/handhelds/arcade boards?

ah yeah, I've never played Secret of Mana but I see the resemblance. There are maybe 3 or 4 more enemy types that I've seen - I don't recognise them from anywhere else but theyre stylistically inconsistent enough that I wouldn't be surprised if they were ripped from other games.

The sound hardware in these things depends entirely on the system-on-a-chip in there - generally in 16-bit consoles like this one (mostly Sunplus hardware I think) the music sounds fairly MIDI-esque, but it's hard to say exactly what it is since Sunplus aren't very open with documentation. Then there are the ultimately NES-based ones like VT03 where the NES sound is still in place; some later/cheaper Jungletac "16-bit" consoles use this kind of hardware and just recycle music from their NES games. A few other developers like Waixing and Cube Tech just used ripped music samples in their games though.

I have this console and i got it when i was on airplane at 2008 or 2007. It stills work, but i cant hear sound effects&music.