Some consoles get cloned a lot. Others don't get cloned at all. A rare few occupy the strange middle ground where they were cloned maybe once or twice, but the clones never really caught on; one of those is the Game Boy Color. Strange, given how popular it was, and how much pirated software exists for it - the original Game Boy saw a few clones (though still not many) but the Game Boy Color had... two, that I know of. Both of these were from the same company, which is either called Gangfeng or Kongfeng Industries depending on how they feel like romanising it, and both saw a brief production run in China but were never really exported. Today I'll cover the first, and I'll come back to the second some other time. 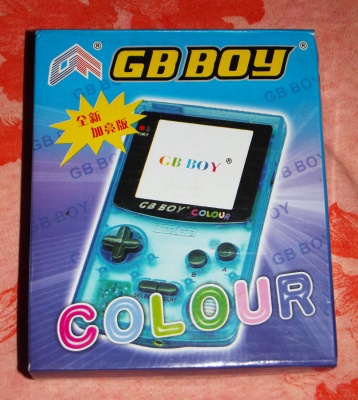 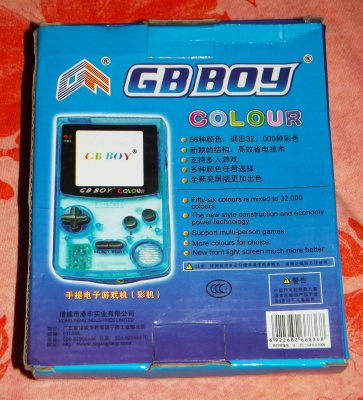 It's... the GB Boy Colour! Nice to see the British spelling there, although they lose a few points for picking a name that would expand to "Game Boy Boy Colour". This is actually the successor to a previous Kongfeng console called the GB Boy, which was (as you may have guessed) a clone of the mono Game Boy, in the style of the later Pocket revision; that hardware was reused by a number of manufacturers but the GBBC seems to be a Kongfeng exclusive. So let's take a look at the console: 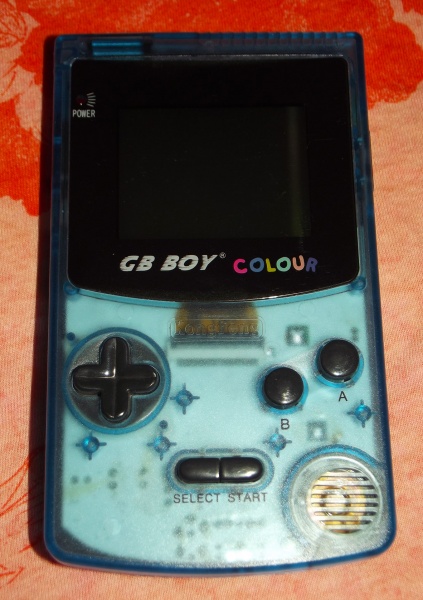 Aside from the name and the slightly redesigned buttons, it does look an awful lot like a Game Boy Color, and in fact it feels a lot like one too; the plastic is really high quality and it doesn't feel cheap at all. The link cable port is present and correct too, and there seems to be an infrared port although I'm not entirely sure if it works or not. And you'd probably never notice anyway since only about three games used it. 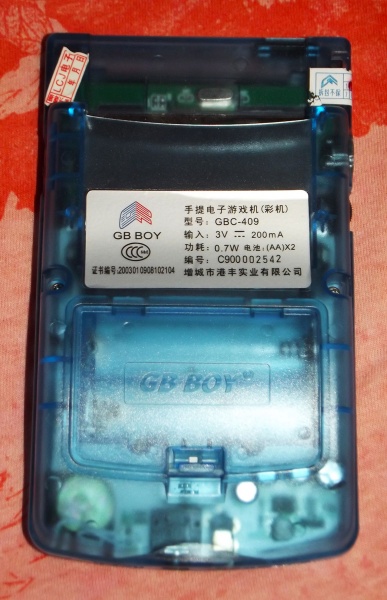 It takes 2 AA batteries just like the original, and the battery life seems decent enough, although sometimes it seems to drain one of them for no particular reason when the console is switched off, so maybe don't leave them in. It also takes the same AC adapter as the original - they really have gone all-out with the cloning here. 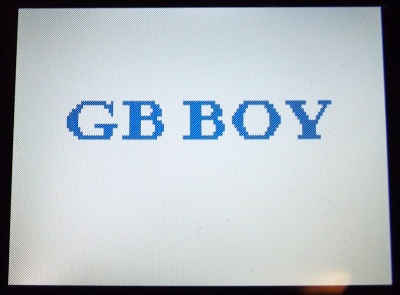 Switch it on and you see the GBBC's major improvement over the original... the screen is backlit! (Despite the box claiming frontlit, which must be a first - a clone manufacturer understating the capabilities of their clone?) The screen does have a slightly stretched aspect ratio (probably to be expected, I doubt anyone makes GBC-standard screens anymore) but it's generally lovely.

The boot screen here is much like the original, even with the familiar Game Boy boot sound; instead of "GAME BOY" it says "GB BOY", but they've also (perhaps inevitably) hidden the Nintendo logo (while still checking for it internally), which is a shame because it means you also don't see any of the fancy custom logos used by unlicensed game makers. If you run a mono Game Boy game it supports all the same colour palettes as the real thing; it does seem like they've cloned the boot ROM exactly. 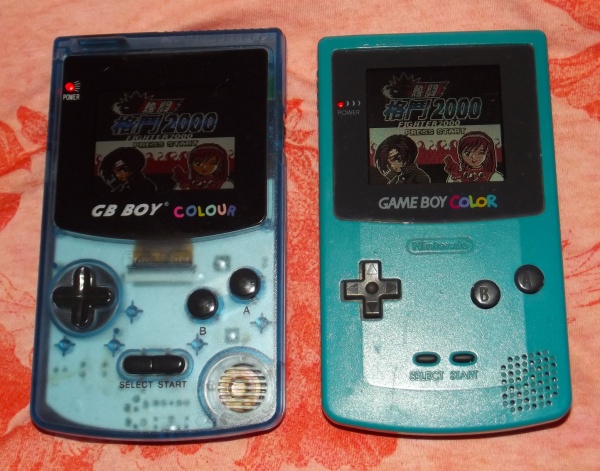 Here it is next to a real GBC; the camera flash makes both screens look pretty much the same, which really really doesn't do the GBBC justice, so here's a flashless shot (blurry, but you get the idea): 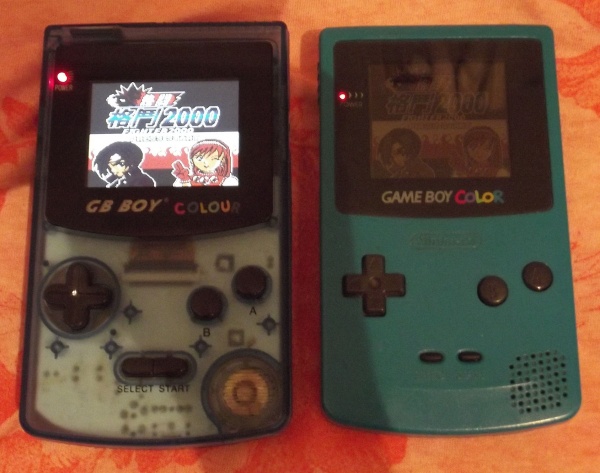 Game compatibility is excellent; licensed games all seem to run perfectly, and all my weird unlicensed stuff works exactly the same as on the original, like Digimon 3 here: 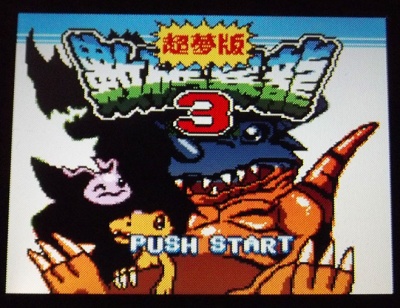 It even runs an Action Replay with no problems. The one exception I've found is a single multicart that won't boot on the GBBC but does on a real GBC, but it's probably some odd mapper trickery on the cart to blame. Running the same game side by side with the real thing, the GBBC does seem to be very very slightly slower, but nothing noticeable in normal play.

Sadly, no clone is without its flaws, and the GBBC has one or two. The biggest, for me, is that the internal speaker only seems to be wired up to one of the stereo audio channels (either left or right, not sure which); this means for games that make use of stereo you'll lose out on anything that only comes through in the other channel. Some games are quite badly affected, others aren't affected at all. It works fine with headphones though. The screen covering is unfortunately very susceptible to scratches, as well; mine sits in a drawer most of the time with nothing on top of it but it has still somehow accumulated more scratches every time I take it out - you may want to invest in a screen protector (a generic mobile one cut down to size should do the trick) if you get one of these.

Despite all this, though, it's still a very impressive clone, and if you're willing to use headphones to sidestep the audio issue it's a great way to play GBC games on a much nicer screen.

Heck, maybe I should get one...

Awesome review! :) Multicarts don't always work perfectly sadly, but it's worth the money. (especially for the screen)

Did you notice a slight variance in backlight on your unit? Mine seems to have a very sensitive main power switch. Basically, as long as I don't touch close to it and make sure it's at the very top position, the backlight is ok.
Touch the switch or have it at 99% and the backlight will lose voltage periodically. I wonder if this might indicate a blown cap or something and whether you noticed this issue at all.

I would love to have a yellow one!

try aliexpress! they show up on there sometimes.

These are available on Aliexpress.
Nice little system for the money.

My GB Boy Colour has stopped loading licensed games! As of now, it only loads unlicensed games like Pokemon Diamond and Jade. Any idea as of why that is?

hmm, no, that's really weird D: does it work with pirate carts of licensed games (if you have any of those)?

Hi, Did you test the link functionality ? I think I'll buy one if I can use it to play multiplayer

I didn't, sorry, I don't currently have a link cable to test it with. The port is there though, so it should work, assuming they connected it up properly.

Where did you get that "King of Fighters" 2000 game?
Actually , I have one , and its really hard to find out those days. Did you know somethin' about the manufacturer? I got my copy when i was a child , i remember that trade an old Megaman game for that Kof Bootleg.

Heist - I bought it on holiday in Turkey a long time ago. I also picked up another copy (different label, but identical) in a lot of games from China a couple of years back.. which is why I used it for the comparison, it was just a game I happened to have two copies of.

It's basically a title hack of Super Fighters S, which is a fighting game developed by Vast Fame (although it's really a very extensive hack of Takara's KOF games). Some info here: http://bootleggames.wikia.com/wiki/Super_Fighters_S

Did anybody test if the link cable works with original GBC and this one?

It works the internal hardware shows it works

Digimon 3 crystal Relased by Vast Fame Warrioware Inc Epic Crystal now Version Relased by Yong Yong early 2000s is For get rom not is https.//hhug.me also works in GBX for Gbc emulator was to Also in www.mgba.io Chinese Traditional Name Pirated:路克人 ZX4,决戰三國,魔戒奇兵 and 数码怪兽红宝石版 Not used named chinese Super bot wars x and Digimon sapphire or rockman and crystal english get 9 in 1 get roms