Last time I covered the quite extensive background of the RS-1 series. Today I'm going to take a deeper dive into one particular unit that I purchased off of the internet just under two weeks ago, with the express intent of covering here. So this is FRESH RS-1 MATERIAL right here. 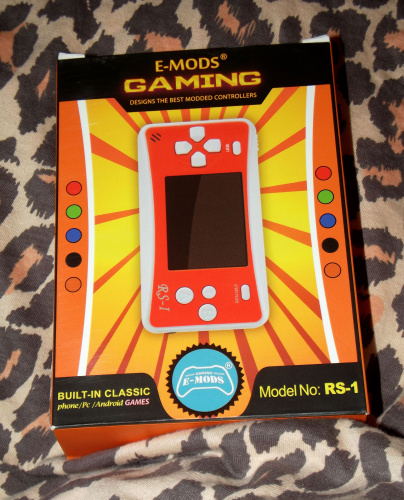 This is the E-Mods Gaming RS-1! They want you to know that they design the best modded controllers. Just FYI. The packaging has been completely redesigned again from the Game Prince version shown in the previous post - it still claims to have built-in games from vastly more sophisticated platforms, but the "i" has been dropped from "iPhone" this time. 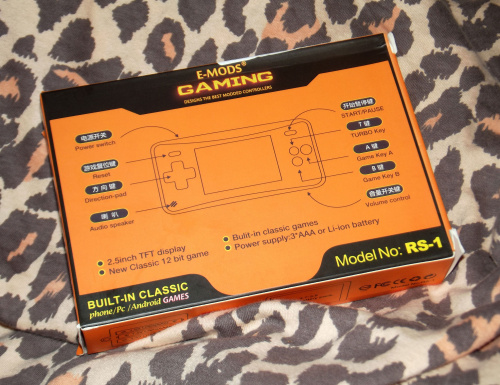 The back shows a diagram of the unit, plus a list of some of its features; the most important thing here is that it has "New Classic 12 bit game", handing it a fully unassailable position in the exclusive 12bit club. The diagram actually seems to have been redrawn or cleaned up from the Game Prince version, yet it still shows a M100 or OneStation or some other copy - with a connected d-pad and bottom-located volume control - rather than the RS-1 itself.

I don't believe the version supporting a Li-ion (🦁) battery was ever produced - at least, I've never seen one. It would require a completely different mould for the back piece, as the current unit is only shaped for AAA batteries; the usual approach for "dual-power" consoles is to design the shell in a way that would fit AAAs one way and then the Li-ion battery at a 90 degree angle to it. (But hey, did you know the original OneStation had a rechargeable battery pack released for it? Because it sure did!)

This top panel has an empty space perfectly sized to the Amazon barcode sticker, if there was any doubt as to where this was intended to be sold. Note that sticker (upside down) says "162红", (红 meaning "red"), alluding to the enhancement made to this particular model above its predecessor. But, anyway, let's get into that box... 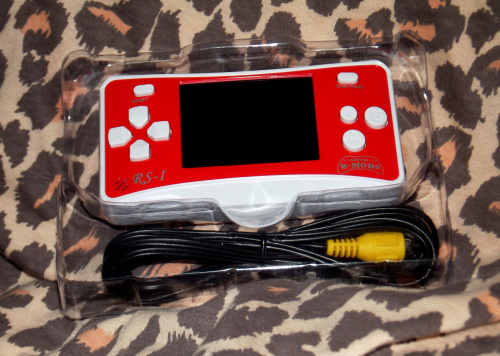 Here's what you get for your money: the RS-1 console, E-mods branded, plus an AV out cable. No lanyard. :( Strangely, the AV out feature isn't advertised on the box at all (the diagram even omits labelling the port on the top), despite being standard across all RS-1 models as far as I know. You may notice here that the console-holding part of the tray has extended, rounded sides, which happens to make it perfectly suited to holding another console in this series, which also happens to be the one I actually wanted to cover before getting down the RS-1 rabbit hole.. but that'll come later. 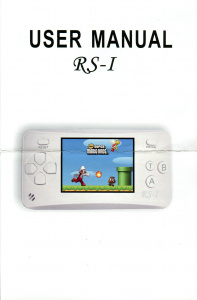 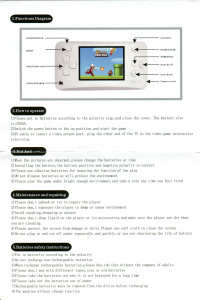 The other thing in the box is this manual, English only, on a double-sided single sheet of paper. Mine actually came with two copies. Bonus!? It saved me a bit of scanning time, anyway. This seems to vary a lot across different RS-1 versions, with some having this same manual in both Chinese and English, and some having a completely different English-only design. 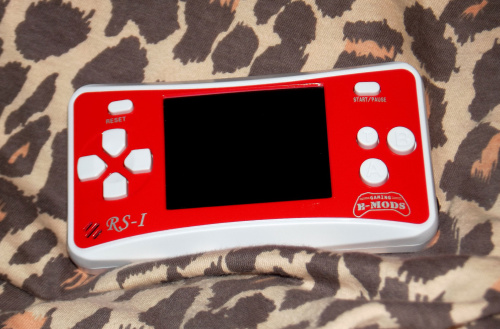 Here's a better view of the console itself - it's quite a nice compact design (for which all the credit can go to the OneStation, which was itself largely biting on the Game Boy Micro, but hey).

One slightly sub-ideal thing it's inherited from the OneStation is its control configuration: absent is any kind of select button, with A and B in reverse order from the original NES, accompanied by a single "T" button. On the original OneStation, I believe this "T" could have different functionality per-cart, with the Mega Drive adapter using it as the "C" button, and (although this is based on fairly hazy memories, so don't take my word for it) the NES multicarts mapping it to Select. On the RS-1, it simply functions as turbo "A". Which, with most games using "B" as the more usefully turbo-able fire button, renders it fairly useless. But you can make Mario do lots of really fast small jumps?

The one thing it does change from the OneStation is the D-pad, going for a PlayStation-style split design rather than the indented single-piece cross pad of the original. (Some early OneStation models actually DID have a split D-pad, but it was of a different design to this one and doesn't actually seem to factor into the RS-1 lineage, as they're descended from the M100 which copied the single-piece design)

Unfortunately, this D-pad's segments are spaced further apart than the PlayStation's, has hard rather than rounded edges (although the degree of hardness seems to vary between revisions), and is actually just 4 separate buttons with no connection underneath... all of which come together to make it quite uncomfortable to use, really. 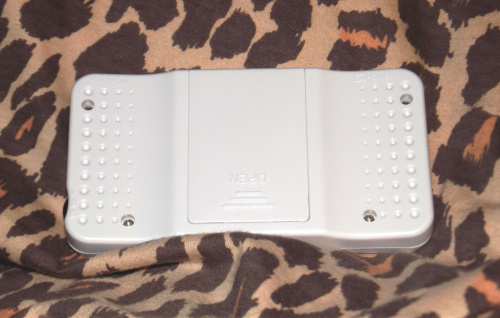 And here's the extremely non-OneStation back I mentioned in the previous post. Can't say I'm a fan - I much prefer the chubby original, which you can see about two thirds of the way down this post. This one just looks cheap. Maybe it's more ergonomic? Also, I haven't taken this picture upside down, they really have moulded the word "OPEN" upside down on the battery cover there. 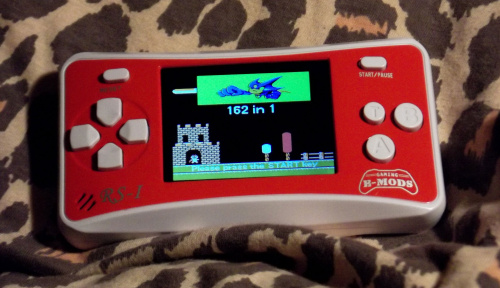 And here's what it looks like switched on. That's right: a hundred and sixty two games in one, a full ten more than the previous RS-1! Such generosity! The screen is pretty nice, as usual for modern handhelds really, but unfortunately is prone to tearing in horizontally-scrolling games. And the little speaker can be turned up incredibly loud to the point of distortion. So there's that. It does, at least, offer a proper volume wheel, which is quite nice to find in 2019 when so many cheap handhelds are resorting to a single button that cycles through a few different volume levels and resets to MEGA LOUD whenever you reset the console.

I touched on the various menu revisions in my previous post, but here's a run-through of the whole menu system on this unit:

There's a lot to unpick here! It's essentially the same as the later 152-in-1 menu lacking a Chinese option (at least, an explicitly choosable one) with the game count bumped up, but let's get into some details. 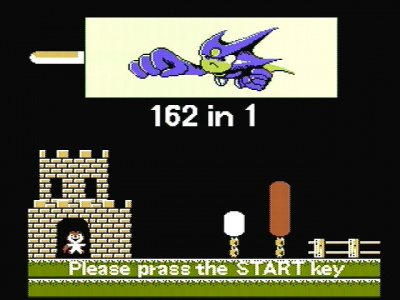 The title screen looks like a copyright-friendly attempt to evoke Super Mario Bros. (which is maybe limited in its legal effectiveness by the fact that the real Super Mario Bros is on here), playing a tune of whose origins I'm not sure, but probably coming from a bank of "multicart music" composed by someone somewhere some years ago. At least it's neither Nice Code music nor Mighty Final Fight music, unlike most Famiclone handhelds these days. 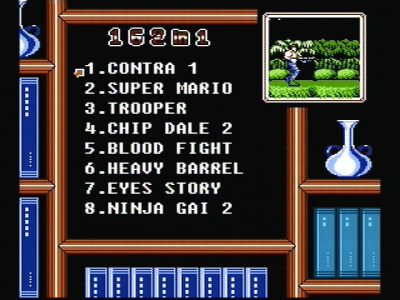 The menu itself has no music, only the usual multicart sound effects. It features the game preview images commonly seen on modern Famiclone handhelds - some of them are literally just bits of wall, and a few are from the wrong game entirely, but at least they tried. Compared to other menus, it does feel fairly slow and clunky when navigating between items, though, and this seems to be related to the time it takes to load in those previews. 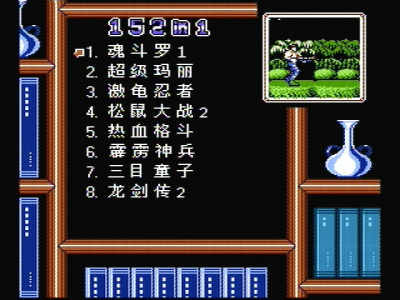 Although the presented menu is English-only, the removed Chinese menu from prior versions can still be accessed by holding START at boot, or pressing it just as the title screen appears. This menu only features the 152-in-1 lineup of the more common RS-1, so presumably there was never any intent of providing a Chinese menu for the new revision. My suspicion is that when the Chinese option was removed, it was done in a fairly clumsy way such that the default Chinese is still selected for a frame or two when the title screen loads, leaving it still unintentionally accessible if the "START" input comes quickly enough. 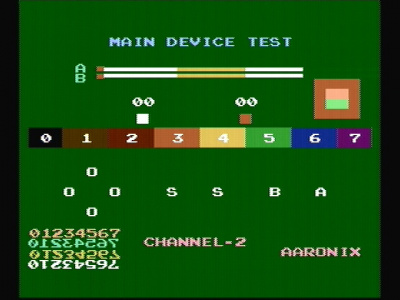 As is common for these things, it has a test screen which appears if you hold A+B on boot; the unusual thing here is this screen is labelled "Aaronix", a Taiwanese console manufacturer from the late 80s and early 90s. This test screen has actually shown up on a number of Famiclone handhelds and plug n plays lately, but I have no idea how the manufacturers got hold of it - I don't even know where Aaronix used it originally, but can only assume some of their old Famiclones had it built in.

One flaw this test screen shines a bright shiny light upon is that sound channel "3", aka the triangle channel, is silent. This is unfortunately a problem with a whole lot of cheap Famiclone handhelds, RS-1 included, meaning a lot of the game music on here loses something from its original rendition.

At this point I should also touch on the TV out, since those videos and screenshots were captured through it. It's pretty decent quality, no major complaints... or that's what I WOULD be saying, if this still had the 152-in-1 game set. Unfortunately, the extra games here expose a major flaw, which I'll get to later.

I wasn't planning to take any photos of the PCB, simply because there's already this teardown of a theoretically-identical model from flawed.net.nz, but I did pop the back off mine out of curiosity and found it's the next PCB revision up - v1.9 on the main green board and v1.8 on the brown one, where the other one was v1.8 and v1.7 respectively. So here are some pics anyway! 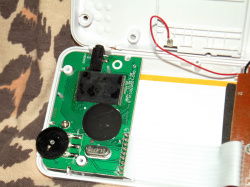 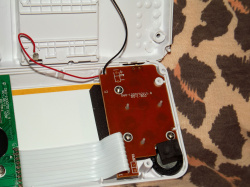 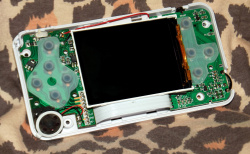 Unlike the somewhat anonymous v1.8/v1.7 boards, these updates actually have the console model number(s) and, in the case of the main board, the date printed on them. The components present here are nothing unusual for all manner of cheap/clone handhelds and consoles - some kind of system-on-chip under an epoxy glob (almost certainly one of VR Technology's VT-series), a flash ROM chip, and a timing crystal. And that's about it.

Next time: the games!

>"it has 'New Classic 12 bit game', handing it a fully unassailable position in the exclusive 12bit club."

...did you purchase a brand new domain just so your website would reference this system? I was wondering why Handheld Underground stopped getting updates; you're posting here, now.

I also want to draw attention to some of the Engrish on the instructions: Number 4 under the "Not And" section says "protest the environment"; I guess they're not very eco-friendly. ☺

The domain isn't referencing *this* system exactly, but it is referencing a different one I found earlier, with the same text on its packaging.. which is going to be the next thing I post about here.